Don’t put all of your eggs in one basket…

The longer I photograph the more I appreciate that photography is a process. It is a rare thing to walk up to a scene and nail a shot with your first frame. A recent trip to Japan provided me with a great example to elaborate on.

Wandering down a street in Nagao, a city known for its hot spring onsens, a sign advertising soft-boiled eggs attracted my attention. I bent down to get nearly eye-level with the sign and then tilted the camera down to include the eggs in the frame and was rewarded with a snapshot that my family would love, but that’s about it. Before abandoning the scene with my snapshot, I checked the histogram and took another look at the shot. Something more than a snapshot had brought me to the scene. Photographing still life provides the bonus opportunity for “redos” with digital photography providing the method to examine those “redos” on the spot.

For this post I wanted to show both the original photo and the shot that I chose as best for the scene. The first photo is too busy and has too much information. There is no definitive place for your eyes to land. In the absence of a good focus point, signs often win by default, which seemed to be the case here. The plastic bags are a huge distraction under the sign. The greenery in the background adds nothing to the photo. The eggs, the true subject of the photo, are lost by scale when compared with the rest of the scene.

Shooting from a lower angle yielded nothing special but when I tried shooting from a higher angle I sensed that I was onto something. The higher I took the camera the more interesting the scene became until all of the things that distracted my eye in the first photograph magically disappeared. The scene became very graphic and all about the shapes. The coins in the basket replaced the sign in indicating that the eggs are indeed for sale. There is just enough information to tell the story of the photo.

Lacking a balcony, stairs, or other means of looking down on the subject, I held the D800 way above my head without any way of seeing what I was shooting. I took multiple wide photos knowing that I have the ability to crop in on the D800. After a few tries, I had something that would work. People passing by looked at me funny or shook their head, but little did they know how much more interesting my contortions made the photo.

In post processing I used Topaz Adjust 5 to enhance the texture of the rocks. I reduced the opacity of the filter and also masked out the effect on the water and egg basket to keep their softness. I also used the adaptive wide-angle filter in Photoshop to correct the skew that was a result of shooting at such a wide angle. 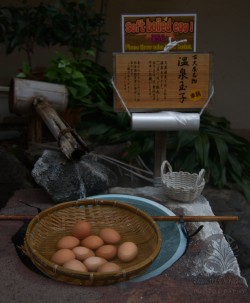 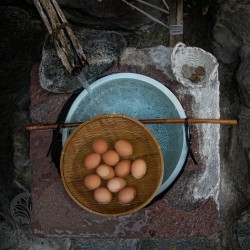