Do you find yourself drawn to the same types of subjects when you take photos?

A trip to Italy last fall caused me to consider that very topic.

I have been to Italy numerous times, sometimes for vacation and sometimes for photography.  Trips in 2006 and 2012 were for the sole purpose of photography.   Small villages in Tuscany are my favorite because I love the character of both the people and the villages.

For my 2006 trip to Italy, I was a new photographer using my first DSLR – a Nikon D70.  My ambition back then was modest: set to automatic mode, hit the shutter button many times, and hope for a sharp photo.

When I went back in 2012, the bar was raised considerably.  I wanted more than just a sharp photo.  I wanted a photo that told a story, showed good use of color, had nice composition, showed depth, was properly exposed, etc.  The list went on and on.  A lot had changed in 6 years.

Before I left for my 2012 trip, I imported all of my “good” photos from the 2006 trip into Aperture because I wanted to make sure I got something different on this venture.  One afternoon in Tuscany on the 2012 trip I happily photographed a woman in a red sweater with her friends, portraits of her alone, and finally with her dog.  When we got back to the hotel that night it hit me – I had photographed the same woman 6 years ago!  I even remembered her dog.  Sure enough I put the two photos side-by-side on the computer and, yep, the same woman and dog

Although the subject of the photo drew me back to her, the stark contrast in quality between the photographs was a pleasant affirmation that my skills had indeed improved over time. 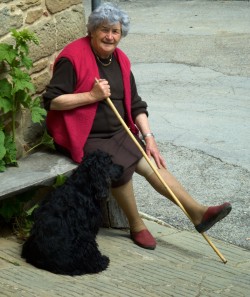 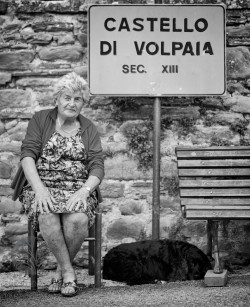